2 different spots in 3 days and both within half an hour of our home in central London! We have had the best swimming times over the last few days – jumping in rivers, ponds and lakes amongst the ducks and the lily pads is the only way to get through this stonking heat.
So the first spot is to remain nameless (we had to have a pact, see) but is in the yard of an old church, on the banks of an Essex river, surrounded by paddocks and horses.
And the second, is open to all (every man and his dog seemed to be there yesterday)- the glorious and ancient Hampstead Heath ponds. More refreshing than a mint choc chip ice cream, even, and the only way to wile away your weekends waiting for your house purchase to go through!
As a result I have gone and bought the book I have been too cheapskate to buy for a year, with England’s most delectable Wild Swims in, and our mission is to check out every one within half an hour train trip by the end of July, and every one within an hour by the end of August. The livin’ is easy….

to be had at Carters Steam Fair! I can’t rave about it enough- men in bow ties, old skool rides, little girls in shiny red shoes, smiliest workers, yummiest doughnuts ever. And when you see it through the viewfinder of an old Brownie camera it adds a whole new level of wonder, innocence and glee. Had a lot of curious looks with my set up (Brownie, digital camera, loo roll and sellotape connecting the two viewfinders) but think it was worth it- fun fairs are meant to be seen this way I think! 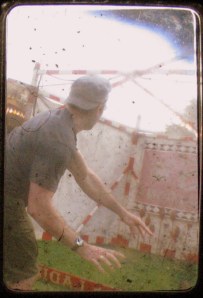 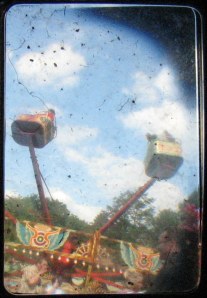 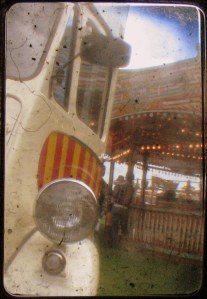 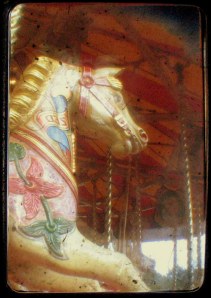 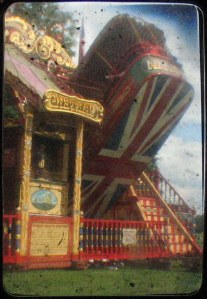 Posted in Our recycled home, Whoops didn't tag these puppies. Bookmark the permalink.

The owl and the pussycat….

A year ago my little nephew Jude was born, and a week later his fabulous dad broke his back in a climbing accident. As you can imagine it has been a bit of a massively intense year for my sister and her family but Steve has recovered incredibly and Jude is completely precious.
They are having a big bash tomorrow to celebrate birthday and recovery with bunting, feasting and general celebratoriness.
I have been making a little collage thing for Jude, based on that old owl and lovely cat in their beautiful green boat. Made with the usual old wood, old paper, gel pens and sewing pattern paper but this time with a dash of acrylic paint:

So, the entanglement of bureaucracy that has held up our purchase of our Camberwell house seems to be nearing the end. Last night we popped over and met the vendor there, a lovely woman, who seemed confident that all would be finalised within weeks. We even have draft contracts! We are getting very excited once again, although when I saw the garden I got palpitations. I had in mind that we would move in and lay out our seedlings but in the three months since we put the offer in it has turned into the Little Shop of Horrors! It’s a jungle out there and definitely not ready for an instant BBQ.

Also, here is the latest bump picture, yes, there is actually a bump there! Can you see it?! I had many formal complaints at the last two pictures being so unbumpus. I have felt Wrigglewriggle (named by my three year old nephew) moving around and even Tim felt it the other morning. Yikes! Very exciting. Here is Wrigglewriggle: 17 weeks today! (Or so they say!) 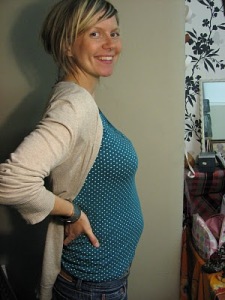 Well, it is Friday, I am off to enjoy some beautiful evening sun. Have a delicious weekend!

Hopped along to the V and A after work on Friday for the Quilt exhibition that I have been planning to visit for a while. It was incredible! Who would have thought 200 quilts could be so ridiculously inspiring? (Plus it was their late night extravaganza so we got to play giant scrabble in the courtyard= much glee.)

There were some totally beautiful quilts from the 1700’s that used stunning, bright fabrics of cherry blossoms and birds, quilts that would have been totally on brand with the look I am currently rolling with in our bedroom!

There were also some blinking ugly ones as well, but hey, they were made by injured men during the Boar war so you can’t expect sweetness and light I suppose.

“At the End of the Day” by Natasha Kerr – it is the main image used for the exhibition’s publicity and then Caren Garfen’s “How many times do I have to repeat myself”, who used screen printed patches (see pic below and lots more on her website), were just the absolute shizzle. 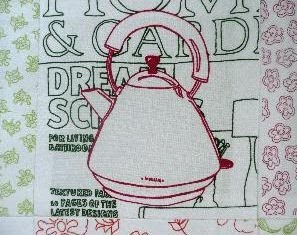 I was almost at the point of starting a quilt when my friends Amanda and Malcolm (the most creative couple in the world?) whipped out their own little project to show me, a huge abstract quilt made of felt, silk and beads that was based on one of Malcolm’s own photos of the rusty edge of the side of a boat. I was motivated then…but I think I was also a little overwhelmed. It took them six months of night and day labour. Eek.

I think I might begin with a midget quilt, enough to just pop at the end of the baby’s cot, just to cover those toes. Reckon I might be able to get one of those done in the 5 months left to go…?
It can be like a love quilt.

When Tim and I first met I started knitting him a love scarf, everytime I knitted a bit I wrote in a little notebook and did a picture of the scarf-o-meter. Then a few months down the track when it was finished I gave him the scarf and the book. It was more funny than soppy, honest. But he did know that I loved him a lot!

At the moment the entry in the baby’s book would say something like this “I am just beginning your love quilt. Hopefully it will take my mind off the fact that my back is killing me because you, my precious rascal, are lying on a nerve!”

Better dash as we decided to bake shortbread but I have sort of left Tim to it a bit. Wish me luck with this patchwork shenanigans…